It breaks my heart to say that today I lost one of my best friends in the world; Scamp.  If it were not for all the tools I have learned over the years, I doubt that I would be able to write today.  Losing unconditional love in a world gone crazy may not seem like a lot, but that is what I lost.  Even as I sat at the Veterinarian’s office, waiting to hear what I already knew; that Scamp wasn’t coming home with me, I saw the love in his eyes and him trying to comfort me as he was breathing his last breaths.  I watched his soul take off, free from the form that he had embodied for 12 ½ years.  I couldn’t help but feel his sigh of relief as he let go of his body.  It was an oddly peaceful moment, where just minutes before, I was so very sad with tears streaming down my cheeks. 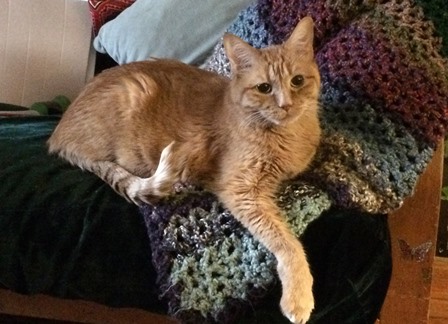 Scamp was the gentlest cat I have ever had. He was playful and gentle and a natural born healer. He came to me when I had cancer as a young kitten. He helped me heal. He helped my husband when his kidneys failed and countless other less serious things. He never stopped. I kept telling him that it wasn’t his job, but he took it on without thought. It was who he was. He loved unconditionally. If he saw anyone in sadness, he came and sat close to give a healing. Scamp loved meditation and receiving healings as well. He came and sat next to me or on my lap almost every time I got grounded and ran my energy. He would often wait till I was “good to go” and then join me. He spent many a day sitting nearby when I worked with clients. He might appear out of nowhere right at a crucial part of a session and then once things cleared out, he would jump down and go somewhere else. The exception for being my meditation buddy was two days in a row, many summers ago. I was meditating and I felt him sit next to me. I reaching my hand down to acknowledge his presence and to my surprise, he wasn’t there. I opened my eyes and was perplexed. I closed my eyes again and my previous cat, Whiteshoes, had come to chat. He said that he was thinking of taking a new body again and wanted to sit with me. He remained throughout the meditation and then came back the very next day. At some point during the meditation he announced that he had decided to go for it and left. The following day, Scamp was back almost like he had given that gift to Whiteshoes. I honor the truly beautiful soul of Scamp and all that he taught and selflessly gave to me. Before sitting down to write this, I lit a candle and spoke to his beautiful soul. He was surrounded by angels and I saw that I was too. I was able to tell him how much I loved him and will miss him and also how happy I was that I had been graced by his love and presence. It was a lovely way to close this chapter. I know that he will be here for me still as he just couldn’t handle the hugeness of his giant heart in such a tiny body. He needed to connect to his HUGE spirit once again and said he is still here for me and my family. Yesterday I was talking with several colleagues and one mentioned that I had several healing contracts and Karma with Scamp along with a few other things. I sat down to clear these up and give my adorable baby some freedom and he seemed much better last night. I was really hopeful that he was going to be able to heal his body. When I woke up this morning, I knew that he was not going to make it through the day and I was very saddened. My heart sank as I prepared for the worst. It was then that I realized that I had helped him so much by clearing those agreements and other things that he now had a choice to leave his body and become a HUGE spirit again. And I had to help him get there. Using the tools has helped me see things in an entirely different way. While I am on an emotional roller coaster, it is not filled with giant highs and lows. It is more like a small rollercoaster, with a feeling if rolling hills. I am fooling myself and there will be times when I cry for missing him, but I know he is in good hands and I will always love him with all my heart.